Many players, coaches, and parents are confused by tiebreaks in scholastic tournaments. So let’s talk about types of chess tournaments and how we decide the winner, shall we?

What is the fairest kind of chess tournament?

Certainly, the round robin (RR). Each player faces everyone else in the tournament, and it’s hard to blame anyone but yourself for your final place! A double round-robin (DRR) is even better, as each player meets their adversaries with white and black.

The largest high-level RRs were the Amsterdam 1964 and Palma de Mallorca 1970 Interzonal Tournaments held as part of the World Championship cycle. Each of these events had 24 players contesting 23 rounds.

“TB” above is Sonneborn-Berger. Today, most wins is sometimes used as first tiebreak. Crosstable: ChessBase

The Zurich 1953 Candidates Tournament was a 15-player double round robin — a monster 30-round event with each player contesting 28 games plus two rounds off.

Clearly, RRs are impractical for tournaments with a large number of players!

When are tiebreaks are needed? 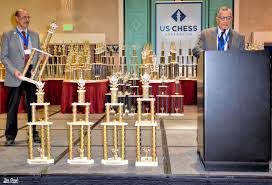 A prominent use of tiebreaks in scholastics is Nationals. Photo: U.S. Chess Federation

To accomodate a large number of players, you need to run a Swiss. Large Swiss-system tournaments are bound to have multiple players with the same score. Ties for first place are common, as well. So what determines the final ranking?

This is especially important when we have indivisible prizes like trophies. Money can be divided equally, so most cash events don’t bother with tiebreaks.

What tiebreaks attempt to measure

Take a four-round tournament with 60 players. If five players tie for 4th place with three points, how do we rank places 4 through 8?

The players will have faced different opponents. Tiebreaks try to determine whose result was “better” among tied players, by figuring out who earned their points against the strongest competition.

There are many possible ways to judge “strongest competition.” Either the tournament will spell out the tiebreaks used in advance or, in the United States, it will be the default M-S-C-O.

This is a shorthand way for Tournament Directors to remember which tiebreaks to apply, in order, especially in scholastic tournaments. They are:

If Modified Median doesn’t break a tie, we move on to Solkoff, and if necessary to Cumulative and then to Opposition Cumulative.

For reasons that will become clear, let’s start with Solkoff (referred to as Buchholz elsewhere).

For this, add up the scores of a player’s opponents in the tournament. The idea is that a higher-scoring field of opponents represent stronger opposition compared to other competitors with the same final score.

(Unmodified) Median removes both the highest and lowest scoring opponent’s scores in the Solkoff calculation (referred to as Median Buchholz elsewhere).

So what is Modified Median then?

Starting with the Solkoff tiebreak, we have a choice of three possible calculations:

If the player scored exactly 50%, we remove both the highest- and lowest-scoring opponent’s scores from their MM calculation (same calculation as Median score).

For a player scoring higher than 50%, we remove only the lowest-scoring opponent’s score.

For a player scoring lower than 50%, we remove only the highest-scoring opponent’s score.

With all of these, subtract a ½ point from any opponent’s score that includes an unplayed game.

Yes, players on 50% often have lower MM scores than players with less points, but this doesn’t matter because they’re only being compared with other players on the same score.

Cumulative is the cumulative score of the player after each round of the tournament.

The best way to explain this is with an example.

Two players finish a four-round Swiss-system tournament with three points. Player A loses in Round 1 and then wins their final three games. Player B wins their first three games and only loses in the final round. What will their Cumulative scores be?

By losing early, you’re pushed down in the standings and face weaker opponents, while a player who wins early but finishes on the same score faced stronger players throughout the event, and lost to higher-scoring players.

A player who loses early and makes a comeback is sometimes referred to as a Swiss gambit — an early loss (or draw against a weaker player) to face lesser opposition the rest of the event. Of course, an early loss is rarely intentional! If you think someone is losing on purpose, tell the TD.

Opposition Cumulative is the sum of cumulative scores of all opponents a player has faced. This fourth tiebreak doesn’t come into play often, but I’ve seen it happen.

Calculating tiebreaks in scholastic tournaments is not arbitrary, nor is it voodoo! Having some knowledge of how tiebreaks are applied and why can calm a lot of frustrated kids and parents when needed.