After mostly choosing authors for this series who geared their writings for beginners and intermediate players, let’s discuss an author on the opposite end of the spectrum.

Muscovite Mark Dvoretsky was a very strong player, becoming an International Master in 1975. In this period he reached his peak as a player but soon became a trainer.

And what a trainer he was! He worked extensively with such players as Women’s World Championship Challenger Nana Alexandria, Valery Chekhov, Sergei Dolmatov, and Viktor Bologan, among many others.

His most prominent student was Artur Yusupov, who rose to World #3 in 1986. Dvoretsky and Yusupov would collaborate on many books for very strong (or at least very ambitious) players. These were borne out of training sessions with future stars, including Vladimir Kramnik and Peter Svidler.

Honestly, no other author scares me the way Mark Dvoretsky does. That’s a compliment, by the way: his books will make you work like no others that I’ve seen. A trademark of his books is very deep analysis of his own games or his students’ games. He will often discuss how well or poorly his students did in solving these training positions.

I’ve read reviews that complain about the inclusion of chapters from other trainers’, but I appreciate the different viewpoints. Dvoretsky frequently gets lost in a forest of analysis so dense you question how helpful it is to your chess development. The contributors tend to stick to one topic and cover it in very instructive fashion.

I consider my study session a success if I can get through one chapter of one of these books.

These are the books that introduced the West to Mark Dvoretsky. They feature lectures at the his chess school, sometimes with chapters from other contributors like Igor Khenkin, Aleksei Kosikov, and Boris Zlotnik.

I have not read these two books, unfortunately. Well, maybe I have…we’ll come back to that.

Training for the Tournament Player (1993)

Steve Colding of Chess for Children lent me this book in 1998. I remember taking notes and studying it very seriously. The problem, of course, was that I was only a 1400 player…

I absolutely love this book. It isn’t about opening theory, but typical maneuvers and operations in a variety of opening systems. This book forms the basis of how I play the Sicilian against the Grand Prix Attack, and helps orient me when I face King’s Indian Attack-style setups.

Technique for the Tournament Player (1995, with Artur Yusupov)

I think I got my hands on this one, but I’m not totally sure. I’ll discuss it below.

Devour this gem one bite (chapter) at a time. It discusses positional play in ways you wouldn’t expect having read other classics. The contributors each have something valuable to add — including chapters by top players Vladimir Kramnik and Evgeny Bareev!

Assiduous study of this book will vault you far ahead of other class players when it comes to positional understanding.

Attack and Defence (1998, with Artur Yusupov)

This one is quite good, but literally makes my head hurt! Dvoretsky keeps making you think he has revealed the answer to one of his analysis positions…only to go back and reveal a further nuance to consider. The lasting impact it has left on my play is don’t assume. The attack you think is irresistible…the defense you think is impenetrable…may not be so!

This is perhaps the most popular of Dvoretsky’s books, as it is not aimed towards master-level players only. It contains a lot of explanatory material and diagrams, but personally I am not a big fan. Probably I would have a different opinion if I was taking my first steps in chess.

I have never read this book, and don’t intend to. It’s famous for its dense analysis, and is geared towards budding International Masters and Grandmasters.

Before talking about the books, let me just say that I have never regretted purchasing an Edition Olms book, or paying their high prices. They produce gorgeous paperbacks that you never want to ruin: high-quality paper, print, and binding.

Some of these books are reprints of the Batsford books that have long been out of print.

I have not read this one.

A good mental workout! It’s not a puzzle book, but a collection of positions are discussed which feature unexpected tactical solutions. I didn’t find this book as challenging as Dvoretsky’s other works, because of I’m used to solving paradoxical “Russian” tactics.

This book is original, and not a reprint of the earlier Batsford series. It’s challenging, and stresses the importance of small nuances. It’s really helpful if you play King’s English (1.c4 e5) or Reversed Closed Sicilian (1.Nf3 Nf6 2.c4 g6 3.g3 Bg7 etc.) positions from either side.

I have not read this one.

This one really helped me in my coaching endeavors. It stressed to me how individual chess improvement really is, and how much of a disservice coaches can do to their students if they take a cookie-cutter approach.

I very much enjoyed the anecdotes Dvoretsky provides about his experiences as a trainer, and the frame of mind a coach should approach helping a student from. I recommend it to coaches and to anyone directing their own self-improvement.

I have not read this one, but I think it’s a reprint of the 1994 Batsford book.

I believe this one is very similar to, if not a reprint of, Technique for the Tournament Player. Since I couldn’t get that one, I got this version.

The book doesn’t really teach endgame play per se. It discusses the player’s frame of mind when dealing with endgames, and gives some advice for improving your endgame play.

This is the same book as Positional Play.

This is the same book as Attack and Defense.

I stopped buying Dvoretsky’s books because they require a commitment to study that I was no longer willing to give, but I might read his two autobiographical works at some point. His other titles include:

Maneuvering was the great coach’s last book, as he died in September 2016 at the age of 68. The wealth of training material he created will long outlive him.

What are your thoughts on Mark Dvoretsky’s legacy? Please share! 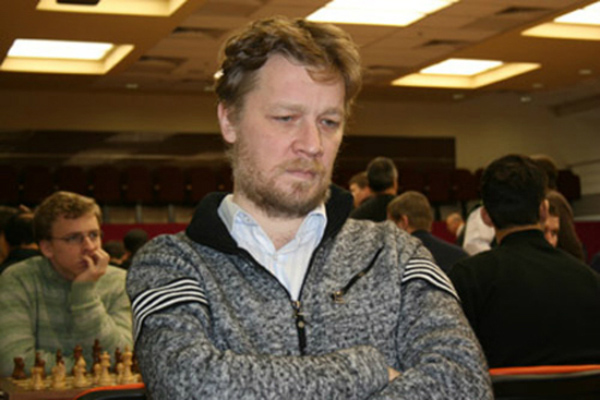 The St. Petersburg grandmaster is most famous for winning the 1999 FIDE World Championship. That earned him invites to elite events, where he generally held his own.

At the 2002 edition of the hallowed Wijk aan Zee tournament, Khalifman was near his career-high rating of 2702 and took down tournament winner Evgeny Bareev‘s Rubinstein French in just 20 moves.

White to play. How did Khalifman end the game suddenly?

A Bolt from the Blue

In Part 1, we looked at French Defense lines where black exchanges pawns on e4.

Now we’ll start looking at the most common center type in the French: white plays e4-e5. In this post we’ll look at the Winawer and Classical Variations.

The next post will feature the MacCutcheon and the Tarrasch.

White locks the center with e4-e5; Winawer and Classical

There are several important lines where this can happen. In all of them, the main idea is the same: Black wants to attack white’s d4-pawn, starting with the pawn advance …c7-c5!

The Winawer is the most dynamic system in the French Defense. It starts as follows:

Now black tries to break down the white center, while white accepts weak queenside pawns in order to get black’s strong bishop. Typically, white attacks on the kingside, and black goes for counterplay in the center and on the queenside. An important example:

This is the Winawer Poisoned Pawn Variation. Both sides face danger! In other versions of the Winawer, black castles kingside while he still can and creates counterplay on the queenside and in the center, while white goes for mate.

A classic example of Winawer chaos comes from the first game of the 1960 World Championship match:

Or the famous duel between Fischer and Tal later that year:

I have never played the Winawer as black in a tournament game…too crazy for me! The next possibilities occurred in plenty of my games, however.

This is another double-edged variation, but play is not as “fast” as in the Winawer. Still, attacks can appear suddenly:

Games in this line often become positional struggles where black’s “problem” bishop on the light squares is a long-term factor:

Both sides have attacking chances here as well, but too much enthusiasm can backfire, as here:

Black can take a pawn but needs to be careful, as shown by games like the following:

With care, black has chances as well.