In Part 1 we took a look at the chess career and many of the books of Edmar Mednis. Up for discussion today is Max Euwe. 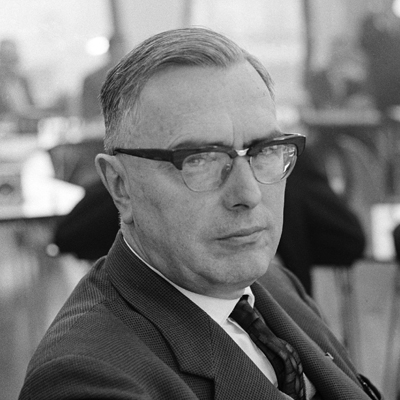 Despite not being a chess professional and playing sparingly, he improved by playing matches against Jose Capablanca, Rudolf Spielmann, and Alexander Alekhine, among others.

Euwe secured a World Championship match against Alekhine in 1935, winning 15½—14½ to become the 5th World Chess Champion. Alekhine won the 1937 rematch, but Euwe’s legacy was secure.

Writings of a Bygone Era

Euwe was a brilliant author because he was clear and to the point. If you want excitement, look elsewhere — plenty of drivel is published each year to serve that purpose. But if you’re looking for pure, unadulterated instruction, Euwe has no equal.

Not all of Euwe’s books have been translated to algebraic notation. I assume this is a big reason the former Champion is not the most popular of chess writers. Well, I’ve got you covered: check out this primer on descriptive notation.

Judgment and Planning in Chess taught me how to recognize the key features of many position types and play them successfully. Euwe tells you what you need to do and shows instructive examples. He doesn’t try to be entertaining or funny — it’s serious work for serious people.

Probably more popular are The Middlegame, Book One: Static Features and The Middlegame, Book Two: Dynamic and Subjective Features. I got these books much later in my chess career and didn’t read them in my developmental years, so I have less connection to them. Even so, I can’t imagine that careful study of these works wouldn’t help a club player immensely.

A Guide to Chess Endings really should be more popular. I still reread portions of it from time to time, and the more I do the more I’m convinced of it’s greatness. The book gives very specific guidance on how to play the main types of endgames, well-illustrated with 331 examples. It also fits in your pocket, and thus cannot be compared with a standard endgame reference book.

I recently learned about Strategy and Tactics in Chess and have skimmed parts of it. It looks like a great book, and I will surely read it one day.

Another famous Euwe book is Chess Master vs. Chess Amateur but I have not read this one. The book contains 25 (composed?) games between a master and a weaker player, annotated to help improving players. This idea has been imitated in other works, but I have to admit I stay away because I’m afraid of embedding bad patterns into my subconscious!

You can’t really go wrong by following the teachings of a World Champion! Especially as skilled a teacher as Max Euwe was. His math students must have been very fortunate to have him.