Most players are used to over-the-board, or OTB, chess. Correspondence games are played over a period of months or even years, and not in person.

They were traditionally played by postal mail, with each player sending moves to their opponent on a postcard. This is rare nowadays, and most games are played via a webserver — just log in, bring up your game, and enter a move on a chessboard. You can also exchange messages with your opponent if you wish.

Individual correspondence tournaments are round-robins with an odd number of players. You play all of your games simultaneously: half with the white pieces, and half with black. The time control is given as X moves in Y days: for example 10 moves in 50 days. This repeats as long as the game continues and a player has not run out of time.

Many sites offer correspondence chess, and the number grows if we include online servers that offer everything from blitz, to standard, to correspondence-style play. However, there is only one place to play official, FIDE-recognized CC: the ICCF. 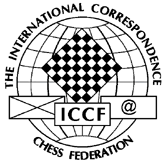 Let’s learn a bit about ICCF’s history, from the body itself:

And the key part:

ICCF is closely co-operating with the leading world chess organization FIDE. All ICCF titles, championships and ratings are recognised by FIDE.ICCF

In addition to World Champion, the ICCF offers the following titles for correspondence play (in descending order):

CCE and CCM were added in the past few years, but I don’t think they’re prestigious, even though I have the CCE title and have a very good chance of completing the CCM title in my current tournament.

ICCF does not prohibit outside assistance. Players are allowed to use engines, which I freely admit to doing.

Besides ICCF being officially recognized by FIDE, this is the other main reason I chose ICCF play: they don’t pretend to police computer usage in long games played across the globe.

Now, no one suspects anyone else of anything. It would be much worse if computer assistance was not allowed, and some players used it anyway to cheat. I have no doubt this happens on other servers.

And I’ve got news for you: simply turning on the engine and having it do all the work for you will not get you very far when everyone else can do the same thing! This has made ICCF play very different than it was in the past, but I don’t see a viable alternative in the computer age. The vast majority of games end in draws.

I’m not very skilled in ICCF play, and don’t take it super-seriously. My opening prep is slipshod, and I’m nowhere close to being a computer expert. Still, there is scope for creativity in opening choices, directing the line of play, and steering games to the endgame. I find “centaur” (human plus computer) chess stimulating, and in some ways it has helped my standard chess, too!

Have you ever played correspondence chess before? Would you ever try it? And how do you feel about the ICCF not prohibiting engine assistance?