This game from the London 1883 tournament is very famous, and for good reason. You won’t forget it once you’ve seen it!

Johannes Zukertort (1842-1888) was born in present-day Poland. One of the leading players of early tournament chess, he challenged Wilhelm Steinitz in the first official World Championship match in 1886, which he lost (5 wins, 5 draws, and 10 losses).

The Black king is clearly in distress, but how should White continue?

A Dean of American Chess

Arthur Bisguier was featured on the cover of the December 1997 issue of Chess Life.

Bent Larsen (1935-2010) was a top player, and a famously combative one, often employing risky openings with both colors. This may have extracted more points than usual against relatively weaker opposition, but sometimes things went badly wrong, as here.

Who’s Afraid of the Pirc/Modern?

In May 2020, I featured another classic demolition of the Pirc; do I have something against this opening?

Variations and symbols are from the bulletin (source: MegaBase). The text comments are mine.

McShane added another notch to his belt when he took down Ivan Cheparinov in just 20 moves during the 2009 European Team Championship.

Longtime readers of the Chess Essentials blog know I’m not fan of sidelines, espeically with White. Many are playable, some even good. But I think players sometimes get into trouble overthinking how they should play these lines. If your line calls for an all-in attack, go for it!

I don’t know how Cheparinov felt, but I would be taken aback by such shameless aggression! I don’t recommend this approach every game against strong players, but I’ve long said that simple, direct plans executed well are easier to play and very effective. Luke McShane provides a great example with this Closed Sicilian/Grand Prix Attack hybrid.

So Easy, A Caveman Can Do It

Ognjen Cvitan (born 1961) is a Croatian Grandmaster most notable for winning the 1981 World Junior Championship.

Our featured position comes from a game played during the 1997-98 season of the German Bundesliga, one of the top team chess leagues in the world.

In a wild King’s Indian Defense, typical of the evergreen Mar del Plata Variation, Cvitan reaches the finish line ahead of the renowned Lubomir Ftacnik.

How did Cvitan (Black) kick off a memorable combination on his 23rd move?

Vasily Malinin (born 1956) is a Russian Grandmaster of both over-the-board and correspondence chess. He was also the 21st and last USSR Correspondence Chess Champion (the final of this multi-stage event, the Rozinov Memorial, was played from 1998-2002).

There really isn’t much else to say, except … enjoy!

What did Malinin (White) play on his 17th move to continue an already crazy Benko battle against Konstantin Andreev?

A breathtaking game by Malinin!

Alexander Morozevich (born 1977) burst onto the world chess scene in the mid-1990s and quickly became a darling of fans worldwide with a unique brand of tricky, aggressive, unorthodox chess. The Muscovite was a protégé of super trainer Vladimir Yurkov (1936-2007) whose previous students included Yuri Balashov, Nana Ioseliani, and Andrei Sokolov.

Morozevich earned his Grandmaster title in 1994. In August of that same year he won the final edition of the Lloyds Bank Open in London with an amazing 9½ points out of 10.

Another particularly stunning performance helped in that ascent.

In February 1998, a 10-player round robin honored the famous trainer of Moldova, Vyacheslav Chebanenko (1942-1997), in the nation’s capital Chisinau.

Alexander Morozevich was only the fourth-highest rated player in the well-balanced Category XII event.

The 20 year old won his first game … drew the second … and then won all the rest! Obviously, his tally of 8½ points out of 9 was enough for first place.

In Round 6, what did Morozevich (White) play on his 22nd move against Viorel Iordachescu?

An Interference Tactic that Makes an Impression

Though he sometimes plays blitz and rapid events, Alexander Morozevich has scarcely played classical chess since 2014 — he won the annual Karpov tournament at Poikovsky in May of that year. It appears he has effectively retired, with little fanfare … a loss for the chess world.

Runner-up in back-to-back USSR Championships in 1945 and 1947, he narrowly missed a chance to face Mikhail Botvinnik in the 1951 World Championship match. He later assisted Tigran Petrosian in his title matches.

Despite this formidable résumé, Boleslavsky’s legacy can be most clearly seen in the Ruy Lopez, King’s Indian Defense, and Sicilian Defense. His ideas are everywhere in these systems. Unfortunately, I doubt most casual players have even heard of him! 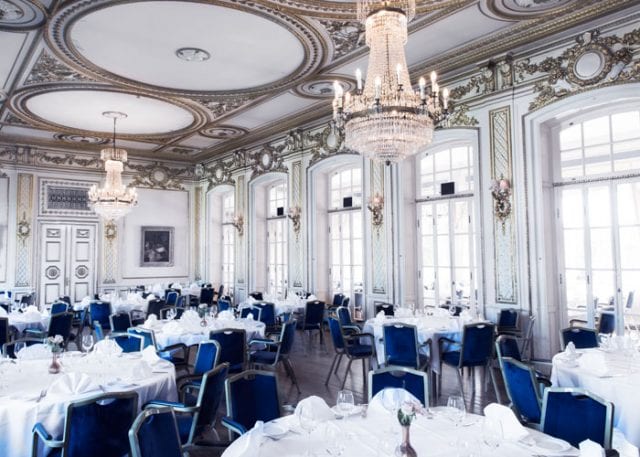 The Grand Hotel Saltsjöbaden, site of the 1948 interzonal.

The very first Interzonal was held in 1948 in Saltsjöbaden, Sweden. Up for grabs were places in the Budapest Candidates Tournament of 1950, the next step in the World Championship cycle. Boleslavsky qualified easily with a strong third place result in Saltsjöbaden behind David Bronstein and Laszlo Szabo. These three players were part of the first 27 awarded the new International Grandmaster title by FIDE.

In the first round of the interzonal, Boleslavsky won a miniature against Finnish master Eero Böök with an important new idea.

Some readers may groan upon seeing the title of this post, and that’s okay. I get it.

Who, when taking their first steps in chess, dreams of winning wars of attrition? Probably no one. On the contrary, I often fantasized about winning a brilliant game in a tournament hall or chess club with a crowd of people watching in awe. Okay, I admit it … I still do!

Alas, I rarely win beautiful games. Most of my wins border on the tedious side — regularly 50+ moves. When I get away from this — whether because of fatigue, laziness, or delusions of grandeur — the results are usually disastrous. I’m just a grinder, and I’ve finally accepted that.

Easier to Play with Black?

With the White pieces, I feel a burden to “prove something” with my advantage of the first move. This often leads to going for too much, and bad things happen.

Grinders subscribe to the “equalize first” philosophy of playing the Black pieces. There isn’t any pressure to “do” anything. Even draws with peers are acceptable, though we want to win just as much as anyone else!

In the right position types, there will often be chances as Black to turn the tables on your opponent, especially if you’re willing to face a mildly unpleasant initiative. For a great example of this, play through Anatoly Karpov’s win against Gata Kamsky from the 1996 FIDE World Championshp Match.

Now I want to share another classic in a similar vein, also one of my favorite examples:

Today is the 65th birthday of the man who taught me how to play chess — my dad.

One Saturday night when I was eight years old, my dad was cleaning out the hallway closet of our family’s apartment. I noticed a folded chess board, similar to this one. I knew it was a chess set — I don’t remember where I was first learned what chess was — and asked my dad to teach me how to play.

That night and the next day, he did. I understood the basic rules plus castling and pawn promotion — later I realized that he didn’t quite understand en passant! We began to play.

Well … I am no Morphy or Capablanca! My attempts to win our early games went nowhere.

My parents, sister and I soon went to the now-defunct Coliseum Books near Columbus Circle. I was looking through the chess books and other things, and my dad saw this cool-looking book that had lots of colored arrows and diagrams! This was apparently not a common thing back then. The book was also written by a Grandmaster! It was …

Better Chess by David Norwood. It combined Advanced Chess and Chess Puzzles into one volume.

I learned basic strategy and solved my first tactical puzzles.

I learned about a bit about four openings explored in the book: the Spanish Game, King’s Indian Defence (sic), Modern Benoni, and King’s Gambit.

In it, I also found my first master game played by the author which I tried to make some sense of with the help of the annotations.

Today, it’s time for me to annotate this memorable game.

I didn’t become serious about chess until a few years later, but the foundation was set. With my second chess book, I was on my way.

The Charlotte Chess Center and Scholastic Academy is currently organizing two concurrent 10-player round robin tournaments: a Grandmaster norm event and an International Master norm contest. Unlike in a Swiss, each player in a round robin knows exactly how many points he will need to score in order to secure the GM or IM result.

Norm events are exciting, especially if one or more players is closing in on the needed score!

FM Balaji Daggupati clinched an IM norm after only 6 rounds! He needs 1.5/2 for a GM norm.

IM Hans Niemann leads the GM norm event with 5.5/7. One win or two draws in the last two rounds will give him his final GM norm, and push his rating closer to the needed 2500 to earn the highest title in chess.

Three players still have chances to earn norms in the IM event.

I’ve annotated the following sharp battle from the very first round of the IM event.