Today I want to discuss a very popular and highly-regarded chess figure who also happens to be the first currently-living author in the series. Serious work for serious people, yes, but more approachable than most Dvoretsky volumes. 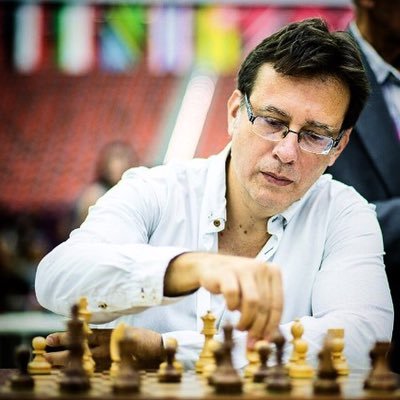 Marin has represented Romania in ten Olympiads, winning a bronze medal on Board 3 at Thessaloniki 1988. He earned the Grandmaster title in 1993 and was ranked one of the World’s Top 100 Players in 2001.

These are certainly impressive accomplishments, but Marin was destined for greatness in another realm of chess.

Starting at the Top

The first offering of a living legend.

In 2003, Gambit Publications issued Mihail Marin’s first book, Secrets of Chess Defence, which was nominated for the 2003 ChessCafe Book of the Year Award.

Gambit also published Marin’s Secrets of Attacking Chess in 2005, which was also well-received. If you can even get one of these books, you’ll pay a pretty penny! Well, there’s always Kindle…

New publisher Quality Chess lived up to their name by bringing Mihail Marin into the fold early on. He has produced a string of hits for them — behold:

Learn from the Legends: Chess Champions at their Best (2004)

This book won Marin the 2005 ChessCafe.com Book of the Year Award, and was so highly-acclaimed that it has been revised and reprinted multiple times.

A book that definitely lives up to its hype: pleasant and instructive.

A player who has decided to play 1…e5 in response to 1.e4 needs to prepare for the different lines white can employ. Fortunately, few of them cause much trouble and Marin prepares his reader to understand the ideas behind his recommendations.

A second edition of this book was issued in 2008, but don’t let that concern you: the majority of lines in this book haven’t seen major advances in theory that should concern the casual player.

I’m not sure there’s a better resource for the Double King Pawn.

A Spanish Repertoire for Black (2007)

He gets into some of the history, maneuvers, and reasoning for why lines developed as they did. This is not a waste of your time: such insights come to the rescue when you find yourself facing a move you have not studied. Marin’s discussion of the “Spanish Knight” is worth the cover price alone.

This book should be used with Beating the Open Games, above.

This book celebrated the 50th edition of the Reggio Emilia tournament held in the Italian city bearing the same name. It contains plenty of photographs, crosstables, and stories — as every tournament book should.

Held over the New Year holidays every year from 1958, the series unfortunately ceased to exist due to financial issues. Anish Giri won the 54th and final edition in 2011/2012.

These three books ushered in unprecedented popularity of the English Opening at all levels!

From club players to super-GMs.

I have not read them myself, actually. But I have no doubt about their influence, as I recently alluded to. It could be decades before someone creates a more authoritative series of books on a major opening system.

I don’t play the Pirc, or play against it, generally. So this book isn’t for me, strictly speaking.

Still, I agree with the rule that good chess authors write good chess books, and I’m sure I would learn a lot about chess in general by reading this book.

If you have any interest at all in the Pirc, I would highly recommend taking a look…but you probably own this book already!

Mihail Marin has written a “textbook” for the makers of Chess Informant!

He stresses something that I often remind students and parents about: following the computer’s every move or recommendation is very limiting because the machine cannot help you during the game — at least it should not!

Having a good foundation of classical games and understanding cannot but help you. Over the years I have seen countless young chessplayers make serious mistakes because they lack this base.

Mihail Marin has authored several ChessBase DVDs (which can be purchased for download)  and contributed to countless others including, for example, the Master Class series.

I have an old ChessBase Catalan E00-E09 DVD by Marin somewhere. It was well-organized and thorough, even though I didn’t end up playing the opening after all.

Who knows what other great materials Marin has in store for us? I for one can’t wait!

What do you think of Mihail Marin’s books? Please share!